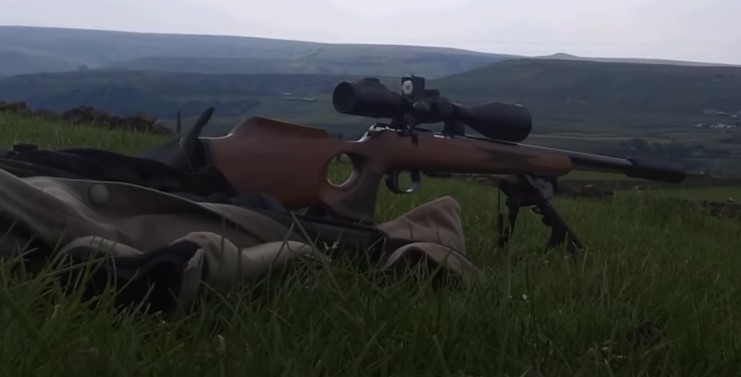 I’ve set a two target cell about 200 yards, the endpoint is going to be where this red dot is and I anticipate the drop to be somewhere around. There was a slight breeze at the moment. I didn’t think there was when I first started walking down and there actually is and it’s blowing from left to right. So with that in mind I’m gonna aim at this side of the target card so I will then in line with the top red dot. Actually I’m on the edge of the paper well looking for his group size and also drop, so that we know how much we need to adjust by at 200 yards. So I’ll zoom in on this target.

Now i will walk back up to the 200-yard mark, set the rifle up and we’ll say we get on.

This is the HMR as Hornaday claimed a 200-yard rifle. Most put some rounds downrange and find out. That was in a three mile an hour crosswind a min about here, which was one mil dot adjustment for windage. It gave me two mill dots a drop which I anticipated and the size they group there is probably about maybe two inches maybe slightly more.

Some size comparison for you I mentioned that this is the size of a five pence piece. This is a UK ten pence piece.

You’re looking around two inches I would say from one extreme to the other, this is a nice tight little group.

Would I go for a head shot a rabbit in a three mile, an hour wind at 200 yards? No probably, not in fact I’m sure I wouldn’t.

Would I go for a crow shot any chest chin would yards? I’d be very very tempted if there was no wind at all you bet I would. In a three-mile an hour crosswind, I’d like to get that down to one-eighty or one fifty as a max range.

I’m sure you’ll agree not bad at all in wind and in terms of the drop as I say to mil-dots holdover about 200 yards. Someone said to me the other day that the 17 HMR whilst it has twice the power doesn’t mean you can extend the range by twice the distance. I have to disagree with that comment, that’s kind of group that I’d expect to cease from hundred yards, so effectively the 17 HMR is careful of producing a group like that double that distance 200 yards.

So my personal preference at the moment it still is the 17 HMR if I’m shooting out to 150 yards in calm conditions. I’ll be pretty confident of a clean kill . 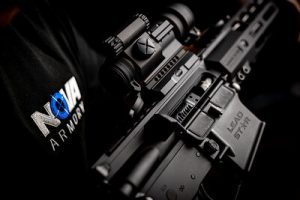